Lecture: Porcelain Figures of "The Nationalities of Russia," presented by Tina Khmelnitskaya

5:30-6:30 pm Mansion and Passion of the Empress open for touring. A Hillwood curator will be stationed in the Mansion to help you explore more about this evening's topic. 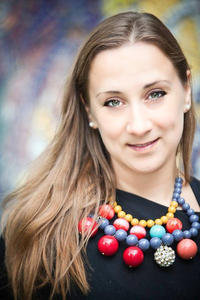 Dr. Ekaterina Khmelnitskaya—who goes by Tina—is a curator of the Russian Porcelain and Ceramics collection of the State Hermitage Museum in St. Petersburg.

A 2001 graduate of St. Petersburg State University, she defended her doctoral dissertation in 2007 on the styles of the interiors of the palace of the Romanov Grand Duke Vladimir. Since 2001, she has worked at the State Hermitage Museum, and since 2003 she has been a curator of Russian porcelain.  She has received research support for work in Germany from the German Chancellor Fellowship and the Alexander von Humboldt Foundation, and from the Max-Planck-Institut for research in Italy—Florence in 2010 and Rome in 2011. In 2012 she was a Fulbright Scholar at the Library of Congress and a Visiting Scholar at Stanford’s Center on Russian, Eastern European and Eurasian Studies.