Discover the finest examples of perfume bottles, gold boxes, porcelain objects, and other eighteenth-century luxury items that were used in the bathing and dressing ritual known as la toilette. 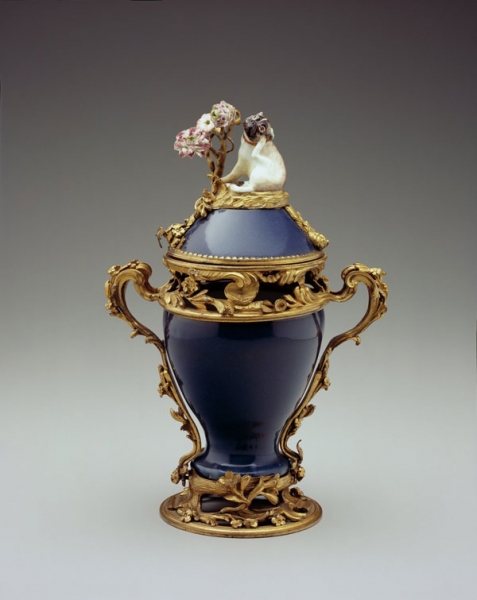 Originally a ritual of court society introduced by King Louis XIV, the term toilette—not to be confused with the modern use of the word—derives from the French word for a cloth—or toile—that covered the dressing table. Over the course of the early eighteenth century, the toilette evolved from an object (petite toile), to a set of objects (service de toilette), to a room, and finally to a lengthy ritual of rising and dressing that included luxurious pampering, primping, wardrobe assessment, and even meetings with special visitors to discuss current events. Rather than an intimate, private moment, a woman’s toilette was often a performance before a large audience.

This special exhibition will present examples of objects from Hillwood's collection that represent the finest luxury objects used in this elaborate ritual. A selection of objects from the private European collection of Givaudan, the Swiss manufacturer of flavors, fragrances, and cosmetics, founded in 1898 by the French brothers, Xavier and Léon Givaudan, will complement the Hillwood collection. Presented for the first time in the United States, the Givaudan collection of luxury objects for the service de toilette is one of the most important  and complete in Europe.

Accessories of the toilette combined luxury, novelty, and exoticism. Portable traveling toilette services, in which elegant silver, silver-gilt, gold, porcelain, lacquer, and tortoiseshell accoutrements and necessities for washing, makeup, and drinking were transported in leather and wood trunks, often lined with velvet compartments tailor made for each object, were also used during the eighteenth and nineteenth centuries.

Adopted by wealthy Parisian men and women as a daily ritual during the mid-eighteenth century, the toilette required a number of luxurious objects. A lady might have had a silver toilette service complete with silver mirror; candlesticks; boxes for jewelry, pins and combs (often featuring portraits of lovers or mythological figures); powder and cosmetic pots; brushes; and a box for toothpaste made from roots and herbs. Makeup included rouge, often made from animal fat or poisonous cinnabar vermilion, powder for hair and face, and face patches made of velvet or taffeta to highlight a white complexion, cover scars, and also convey flirtatious messages. The coiffure was often decorated with ribbons or lace, a sign of wealth and status.

In addition to altering one’s face to look and feel younger and as a form of power, perfume played a vital role in the toilette, rituals of dress, and the art of seduction during the eighteenth century. Consumers preferred finer floral tones to the musky odors and a new preoccupation with bodily hygiene led to an increased use of perfume and the demand for perfume bottles.

Hillwood’s founder, Marjorie Merriweather Post, focused on acquiring magnificent pieces of eighteenth-century French decorative arts, which she valued for their exquisite designs and historic associations, during the first half of the twentieth century and many remarkable objects used for la toilette made it into her collection. Perfume & Seduction will trace the form and function of perfume bottles, explore a variety of shapes and materials and the process of making perfume, and examine the evolution of forms during the nineteenth and twentieth centuries, highlighting examples from Hillwood’s collection. The exhibition will also evaluate other nineteenth and twentieth-century collectors of French eighteenth-century decorative arts, like Post, including industrialists in the perfume and fashion industries. Additional loans, including eighteenth-century French costume and prints, will help illustrate Parisian life and rituals from the period.

Marjorie Merriweather Post favored the perfume Carnet de Bal (“Dance Card”), a fresh and spicy oriental fragrance housed in a brandy glass-shaped bottle, launched in 1937 by Revillon of Paris and created by Maurice Schaller. Beginning in the 1950s, Marjorie used EDCO Home Fragrance at Hillwood and preferred the scent Trefle, one of the more expensive scents. In 1969, Marjorie’s daughter, Dina Merrill (1923-2017), launched her own cosmetics line, in conjunction with the perfume Amaranthe, which she supervised in association with Coty until 1979. The scent incorporated traces of high end liqueur, rose, and jasmine, and was designed to reflect Merrill’s cinematic qualities—blond and reserved. The shape of the bottle resembled a peach, reflecting the cleanliness and good-natured American spokesmodel.

To complement the exhibition, a display of Marjorie’s toilette table, dressing gown, lace, and other accessories, as well as images of Dina Merrill’s cosmetic line featured in Vogue, will be on display in the mansion.