For the first ever installation of art in the gardens, Philip Haas’s sculptures bring a monumental interpretation of Giuseppe Arcimboldo’s celebrated botanical paintings to Hillwood this fall.

The lush foliage, colorful blooms, and vegetation native to each of the seasons are spectacularly transformed into four larger-than-life, three-dimensional portrait busts for the special exhibition Four Seasons, on view at Hillwood from October 1, 2016 through April 2, 2017.

Contemporary American artist and filmmaker Philip Haas’s fifteen-foot high fiberglass sculptures are inspired by the series, The Seasons,by Italian Renaissance painter Giuseppe Arcimboldo (1526-1593). This unusual series represents each season through the depiction of a portrait rendered in botanical materials such as flowers, fruits, vegetables, and branches. Haas’s re-creations transform these intriguing works, enlarging the scale, altering the materials, and adding dimensionality to shed a contemporary perspective on the popular paintings. Four Seasons represents the third contemporary art exhibition at Hillwood, following the notable presentations of works by Eva Zeisel in 2005 and Isabelle de Borchgrave in 2012. It is the first time Hillwood has presented an installation of art in the gardens. 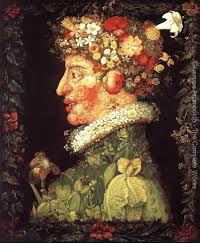 Giuseppe Arcimboldo was a Renassiance painter, born in Milan, who likely studied the works of Leonardo Da Vinci before he left Italy to paint for the imperial courts of the Habsburg rulers in Vienna and Prague. During the reign of Austria’s Emperor Maximilian II, Arcimboldo created the series The Seasons, comprising Spring, Summer, Autumn, and Winter. The portraits, painted in 1563, depict faces composed of plants associated with each season. Rosebuds form the lips of Spring, while a ripe peach stands in for a plump cheek on Summer. The portraits also represent the ages that are often linked with each season of the year. Spring is a youthful face crafted from flower blossoms and lush greenery. A wizened old man’s face, constructed out of twisted tree branches, is the subject of Winter. The strange series was greatly appreciated for its humor as much as for the artist’s technical skill, and the paintings became quite popular in the Habsburg court.

Unveiled in 2012, Haas’s sculpture series offers a new perspective on Arcimboldo’s The Seasons and is an intriguing work of art in its own right. Spring, Summer, Autumn, and Winter stand fifteen-feet tall with giant fruit, vegetables, and flowers forming their massive features. The smile on Summer is constructed of two pea pods several feet long, and grapes larger than basketballs hang in bunches from Autumn’s head in lieu of hair. The towering figures feature Arcimboldo’s blend of the natural and the fantastical on a remarkably grand scale.

Winter was first displayed at the National Gallery of Art in Washington, D.C. in 2010, before traveling to the Piazza del Duomo in Milan and the Garden of Versailles in 2011. In 2012, all four sculptures in Four Seasons were shown together for the first time at the Dulwich Picture Gallery in the United Kingdom. Since then, the show has travelled to museums and botanical gardens throughout the United States. Hillwood’s installation of The Four Seasons will be the first time all four sculptures have been displayed together in Washington, D.C.

Philip Haas's exhibition at the the Kimbell Museum of Art, Butchers, Gods, Dragons & Skeletons, was listed by Time magazine as one the ten best U.S. museum show of the year. He is the recipient of a Guggenheim Fellowship, the Venice Film Festival's Premio Open, as well as other awards. His feature film, Angels & Insects, was nominated for the Cannes Film Festival Palme d'Or and an Academy Award."

Art in the Gardens

The fantastical seasons will emerge from the ellipse lawn at Hillwood, encircled by flowers, shrubs, and verdant woodlands. Viewers will be invited to explore the intricate details of the sculptures from all angles, discovering the previously unseen sides of Arcimboldo’s two-dimensional interpretations. Beginning in October and remaining on view through March, the installation will weather the changing seasons, as the surrounding gardens transition from late summer, through fall, winter, and into early spring.

All exhibitions and programs are funded in part by the U.S. Commission of Fine Arts through the National Capital Arts and Cultural Affairs program.