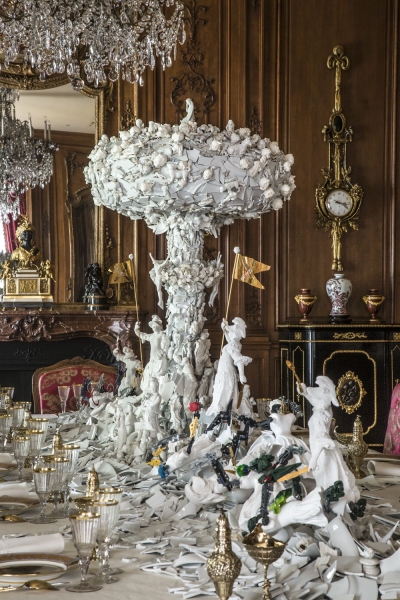 A remarkable ceramic centerpiece, created from thousands of white porcelain fragments, in the form of an epic battle will transform the dining room at Hillwood this fall. Inspired by seventeenth- and eighteenth-century centerpieces crafted in sugar and porcelain, War and Pieces is a contemporary response to this tradition.

In the seventeenth century, wealthy households decorated their tables with extravagant sugar sculptures that replicated allegorical scenes, architectural follies, or classical figures. By the eighteenth century, artists augmented or replaced the decorations with porcelain, including that by Meissen and Sèvres, early porcelain manufacturers who used skilled confectioners as their first modelers.

War and Pieces comprises seven sculptural vignettes, created in both sugar and porcelain, along with pieces of plastic toys. “It’s a battle between the Ancien Régime of sugar and porcelain with the plastic elements the modern interlopers,” de Vries said of the work. Six of the scenes represent Roman war deities Mars and Minerva doing battle, with Minerva usually dominating and declaring victory. Both figures use table utensils as weapons as they stand among decapitated figures and severed heads–what de Vries calls “Hummels gone wrong”—and the broken remains of ceramic dinner plates. The focal point of the work is a weightless mushroom cloud standing two feet tall and nearly four feet in diameter and surrounded by numerous portrayals of the crucified Christ as well as Guan Yin, the ancient Chinese bodhisattva of mercy. At the top of the cloud, an angel cries. Besides war, chaos, and aggression, the installation also features humor and beauty, undermining classical symbols in a satirical and critical way.

This exhibition marks the second time that the grand dining table at Hillwood features a contemporary interpretation of earlier centerpieces. In 2009 and 2010, as part of the exhibition Sèvres Then and Now, the table featured the Sèvres 1979 centerpiece called Ruins of Egypt, a whimsical take on monuments from antiquity crafted in biscuit porcelain.

Called a “masterwork” by art critics, War and Pieces has toured venues in Europe and Asia since 2012. Hillwood will become only the third venue in the United States to display the work.