In skillful hands, natural stones are transformed into fascinating works of art.

Marjorie Merriweather Post was a renowned collector of jewelry and gems and today her collection is considered to be one of the most important of those assembled in the twentieth century. Marjorie’s interest in gems and minerals wasn’t limited to its use in jewelry and a less well-known but no less dramatic area of her collection reflects the appreciation she had for the finest hardstones. Natural Beauties is the first exhibition at Hillwood to focus on the exquisite stones and minerals that became works of art in the hands of masterful artisans. It will present a selection of nearly 100 objects from Hillwood’s collection alongside loans that further explore the beauty and history of the precious stones. 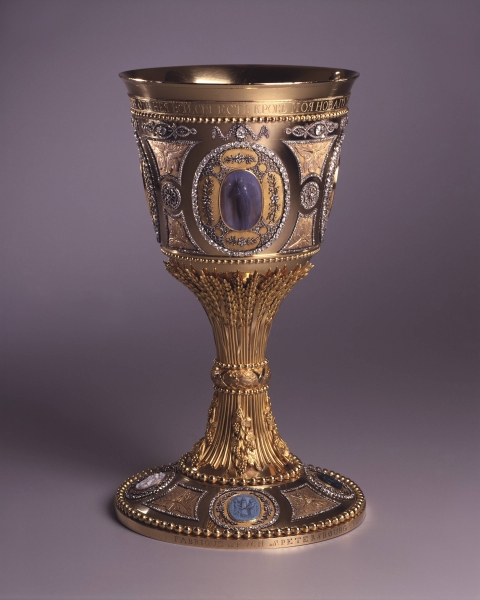 Hardstone is the English translation of the Italian pietra dura, which refers to a specific local inlay technique using cut and polished colorful stones. The general meaning includes a range of “hard” materials often called semi-precious stones or gemstones. Works presented in the exhibition are crafted from materials like jade, agate, onyx, rock crystal, amethyst, jasper, malachite, and lapis lazuli. Highlights include a malachite table made in Russia in the mid 1800s; a collection of delightful containers and small objects made of bloodstone—Marjorie’s birthstone; a Fabergé snuffbox made of gold, diamonds, emeralds, amethyst quartz, and spinel; and the famous Buch chalice, commissioned by Catherine the Great and featuring an impressive combination of gold, diamonds, chalcedony, bloodstone, nephrite, and carnelian.

Though Hillwood’s collection is renowned for its French and Russian holdings, reflecting Marjorie’s two primary interests, an exploration into hardstone objects reveals how her preference for finely crafted objects extended to Far Eastern objects of jade and other semi-precious materials. Natural Beauties will feature a selection of Hillwood’s Chinese jades and gems.

The French and Russian art collections also represent amazing lapidary works. In the Soviet Union in the 1930s with her husband, Ambassador to the Soviet Union Joseph Davies, Marjorie discovered that Russian artisans were highly skilled at turning hardstone into beautiful works of art. Today, Hillwood’s collection of Russian hardstone objects includes hardstone seals, malachite objects and furnishings, and rock crystal chandeliers. More than twenty of the approximately ninety pieces in the famous Fabergé collection are made of hardstone.

One of the most impressive hardstone pieces in the collection is a table top Marjorie commissioned in the 1920s from the Società Civile-Arte del Mosaico in Florence for her Palm Beach residence, Mar-a-Lago. The table, designed by architect Joseph Urban, was acquired from Mario Montelatici’s workshop. Its twelve leaves feature designs in pietra dura that recall those seen on sixteenth- and seventeenth-century models in the Pitti and Uffizzi Galleries. The table is probably the most imposing mosaic top ever produced by a Florentine workshop and is now a favored object at Hillwood, adorning the stately dining room.

Marjorie was an important client to many luxury firms in the twentieth century, including Cartier, in New York and abroad. From them, she selected not only extraordinary pieces of jewelry, but also exquisite objets d’art, including frames, ashtrays, desk sets, and bell pushes that were finely crafted from lapis lazuli, agate, onyx, jade, and nephrite and ornamented with enamel and precious stones. Today they form a distinctive assortment of art deco objects, held largely in storage, and explored as a collection exclusively for Natural Beauties.