Imagine it’s wartime Washington, the Soviet Union has become an American ally, but talk of the Cold War is starting. How captivating art and liturgical objects brought back from the far-away country must have seemed to Americans for whom the Soviet Union remained a great mystery.

Such was the curiosity offered by her social circles when Marjorie Merriweather Post returned home from the Soviet Union with firsthand accounts and an intriguing collection of icons, chalices, porcelain, and silver drinking vessels from the virtually unknown land, encouraging her to expand her collection and share it with the public. 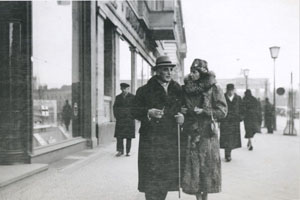 Joseph E. Davies, in the 1930s. Finding the imperial porcelain, silver, enamels, and glass perfectly suited to her taste for the beautiful and finely crafted, Post laid the foundation for a lifetime of collecting—ultimately assembling the largest collection of Russian imperial art outside of Russia.

From the 1920s, the Soviet Union had been selling off many of the art treasures it had confiscated from the church, the imperial family, and the aristocracy in an effort to fund the new government’s industrialization plan. American businessman Armand Hammer and his brother Victor acquired enormous numbers of these Russian treasures and, in the early 1930s, began to sell them in American department stores and later in their New York gallery. As a result, the state-sponsored sales in the Soviet Union were winding down as the Davies arrived. Surprising discoveries were still to be found, however, and Post purchased a number of porcelain, silver, enameled, and liturgical objects. She recalled in later years finding silver chalices tarnished beyond recognition, being sold by weight, and heaps of church vestments in the neglected back rooms of commission shops and state storerooms.

In 1926, long before she discovered the splendor of Russian art, Post purchased her first Fabergé piece. 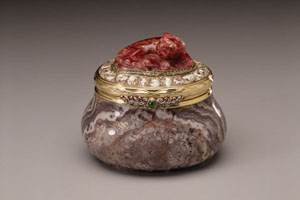 This exquisite amethyst quartz box appealed to her taste for finely-crafted objects and was clearly an extension of her love for French gold boxes that was cultivated earlier when decorating her New York apartment. Five years later, her daughter Eleanor gave her the Catherine the Great Egg, bringing her possession of Russian objects to a total of just two by the time she embarked on her journey to the Soviet Union.

Though she didn’t consider Fabergé to be the most important part of her Russian collection, the craftsmanship and famous jeweler’s connection to the imperial family held great allure and Post continued to collect in this area throughout her life—resulting in a collection of Fabergé that numbers nearly 90 and that serves as a popular attraction for Hillwood visitors today.

The largest single category of Hillwood’s Russian holdings is porcelain. Already collecting 18th-century Sèvres porcelain both for display and for dining, Post discovered the bright colors and lively designs of Russian porcelain when she lived in Moscow and collected many pieces and sets over the rest of her long life. In addition to vases, Post collected tablewares (plates, cups, and saucers), and some tea sets. She only bought serving dishes that were part of services she used on the table and one of the unusual features of Hillwood’s collection is the large number of pieces—enough to serve twelve or more dinner guests—from several sets. Today, these services are displayed in the Dining and Breakfast Rooms in various displays throughout the year to emulate the splendor of an imperial table or one of Post’s legendary dinner parties.

The solemn and spiritual Russian religious pieces on display in the Icon Room and Russian Sacred Arts Gallery represent the core of Hillwood’s collection in this area. Like the other areas of the Russian collection, the initial formation of the collection of icons and religious objects can be traced to Post’s time in the Soviet Union. Davies was the first of the pair to become intrigued by icons and his excitement ignited Post’s appreciation and a lifetime of collecting that resulted in one of the finest small collections of icons in the United States. Highlights of their discoveries in the government storerooms include a pair of Royal Doors with the canopy still attached and icons of St. George and the Old Testament Trinity.

Icons that Post purchased in Paris shortly after leaving Moscow display Post’s collecting tastes fully applied to her acquisition of icons. With their beautifully crafted metal covers (oklads) ornamented with niello, filigree, enamel, and repoussé, the icons of Mother of God “Pledge to Sufferers” (1795) and the Three-Handed Mother of God (1790) were as much examples of the decorative arts as of icon painting and coexisted seamlessly with the French works in Post’s growing collection.

Explore further to see the finest examples of the most comprehensive collection of Russian art outside of Russia.

America's Eden: Newport Landscapes through the Ages with John Tschirch

This is the first program in the Great Homes and