Pageant of the Tsars: The Romanov Coronation Albums

The pomp and pageantry of imperial coronations were documented and promoted in lavish albums that became almost as important as the extravagant events themselves. To mark the 400th anniversary of the founding of the Romanov dynasty in 1613, Hillwood presents a special exhibition of the albums created over the course of the family’s reign. Digital downloads of the albums are free at the iTunes Store.

Over the course of their reign, the Romanovs celebrated coronations with elaborate celebrations, which included their grand entry into Moscow, fireworks, and the ruler symbolically crowning himself. Fully illustrating the grand celebration and all its details, sumptuous albums were created to spread word of the event and all its symbolism. 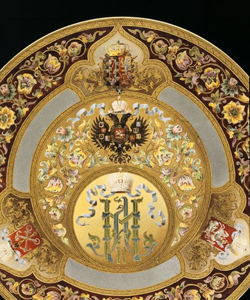 In the year of the 400th anniversary of the crowning of the first Romanov tsar, the most complete presentation ever of these coronation albums, including two copies of the monumental Alexander II album of 1856 with one in its original binding, will be on display at Hillwood. Beginning with Catherine I, Peter the Great’s wife, there were a total of seven coronation albums created by the Russian tsars—each published within a few years of the event. The exhibition will feature five albums from Hillwood’s collection, plus supplemental material on loan from the New York Public Library, the Library of Congress, and the University of Texas at Austin, bringing together six of the seven coronation albums for the first time in an exhibition in the United States. Additions loans to the exhibition  from the Boston Public Library; the Foundation of Russian History; the Morgan Library and Museum; the National Gallery of Art Library; the Smithsonian Institution, National Museum of American History, Kenneth E. Behring Center; the U.S. Geological Survey Libraries; and the Wolfsonian, Flordia International University; and two private collectors are on display.

With objects from Hillwood’s Russian decorative arts and paintings collection—the most comprehensive one outside of Russia—an exploration of the Romanovs’ lasting influence on Russian art and culture will add to the understanding of their reign and the coronation albums. Coronation books from other countries such as the Holy Roman Empire will illustrate the bearing that the West had on the Romanovs and the dynamic relationship of the cultures. 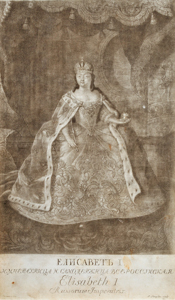 These lavishly produced albums are art objects in their own right with eye-catching bindings and illustrations—primarily engravings and chromolithographs—by the best artists and craftsmen of their day. Published in small print runs they were presented to other courts, diplomats, family members, and important guests by the Tsar. Because they were not widely available beyond these circles, a public collection like Hillwood’s, with five of the seven albums, is rare. Featuring views of coronation processions and ceremonies; images of official dinners, balls, and imperial regalia; exact copies of dinner menus and more, the albums offer a fascinating portrait of the dynasty, and what each ruler wanted us to see and remember for posterity..

In addition, the images of each coronation album already digitized by the New York Public Library in their Digital Gallery will be presented as an e-publication on iPads placed in the exhibition space. Visitors will be able to scroll through selected images from the book, examine images not on view, and zoom in on details. The entire e-book will be available as a free download from the Apple iBooks store and available for use during and after the exhibition.

Download digital versions of the albums for free at the iTunes Store.